In this blog post, I will share a technique that Laurent Spielmann (@laurent_at_joes) and I developed together and that greatly simplifies imports. It uses ODBC import.

Have you never been bothered by inconsistent database structures between a data source and your own application?

Have you never cursed the SQL developer who uses as a unicity key a concatenation of several columns?

Have you never felt anxiety before renaming a field because it could break an import order?

Have you never lost your temper in front of a progress bar during a sync operation on a ESS table?

If you answered no to all of these, I’m jealous. This article is for the rest of us. 🙂

Some technical background for a start

FileMaker has had a great friend for a long time: ODBC.

What script steps are we talking about?

Note that it is not possible, at least to my knowledge, to read data from an external source without writing to a FileMaker table (import). One could expect that Execute SQL would return the result of a SELECT statement to a variable, but it doesn’t.
Tip: Execute SQL can also modify the structure of a database. (CREATE, DROP, ALTER…). Come back to this tip after reading this article. Could give you ideas.

The main reason why these features are somehow neglected is that they require a DSN (Data Source Name) to be installed at the operating system level, and sometimes, depending on the database, a specific driver.

A DSN is needed for the operating system to give applications access to an ODBC data source. ODBC is a standard that allows different databases to communicate using SQL. (Open DataBase Connectivity).

On the Mac, you have to setup a DSN using ODBC Manager, that used to be installed by default in /Applications/Utilities/ before Apple decided it was too good for you. Fortunately, unlike MagSafe connector and other great hardware and software features removed by Apple, ODBC Manager can still be downloaded here. 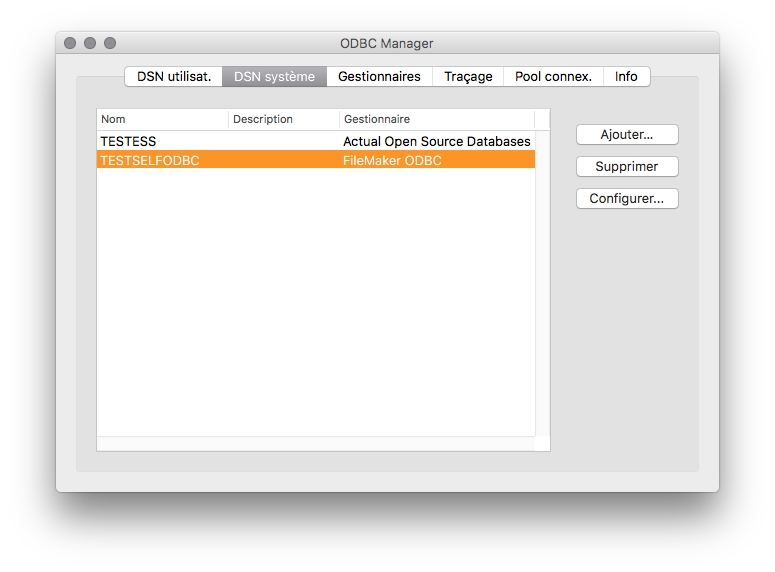 While it is true that setting up a DSN on each client machine is complex, it’s a snap to install it once on the server.

What’s more, and while Import Records [ ODBC data ] has always been server compatible, Execute SQL has become server compatible only with FileMaker Server 15. Enough to re-think some stuff!

To sum up: you can now set up a DSN only on the server and benefit from it on all clients, including Pro, Go, WebDirect and CWP.

However, the developer (that’s you) will also need to access the SQL sources in order to write scripts (namely to configure import orders). To address this you’ll simply have to set up the same DSN on your computer, paying attention to using exactly the same name. So you will be able to edit your scripts and the server can perform them.

Here is a short summary of the situation we had to address. We have to import a massive amount of data stored in mysql.
Performance is a key here, and this excludes ESS immediately. By the way, we had really no reason to consider ESS: this technology is good at one thing only: present and manipulate external data as if they were FileMaker data. Nothing else. It’s really NOT designed to import or run synchronization operations.
So we go for ODBC imports, but refinements are to come later.

So here we are with the following script configuration:

As you can see, the Import records script steps is talking to a DSN with a query that we define as a variable for the sake of readability.

But among the numerous imports we have to make, some are of ‘update’ type (the third option checked in the import order dialog)

The problem is that the unicity criteria does not fit in a single column. To decide wether a record matches and must be updated, 3 columns had to be used as matching keys.

FileMaker allows this, but with dramatically poor performance. Since the number of records was huge, this simply wasn’t an option.

But although we want to import these 4 columns into 4 FileMaker fields: A, B, C, and D, we must update records if a, b and c are matching A, B, and C.

but we know that performance won’t be acceptable.

One way —I’m serious here— would be to ask the SQL developer to update the view and add a column that would concatenate the 3 others. In our situation it would have been a reasonable option, but very often you have simply no control over the source structure.

First, let’s create a FileMaker calculation field that will be a unique key on the destination side.

K is a calculated field such as

By selecting the Matching names options, we end up with this:

and that is way faster!

Wait! that’s interesting, isn’t it? OK, we solved the performance issue, but while doing so we really took control over the left side of the import order dialog (source).
And one of the great issues we face with import records in FileMaker is it’s fragility. The only way to maintain an import order, even if you create or remove fields is to choose Matching names, but then you’re exposed to the consequences of renaming.

As we just saw, we can control the name of the left side columns. Those who already used XSLT to import XML data already knew, but it’s worth mentioning.

Imagine that the original request would be:

and that the target field names would be

and with the concatenation:

Fantastic! we can now use the Matching names option!

Still we knew that the SQL developer might want to rename some columns, or even release new views to replace the old ones after some weeks (this is a real case, not fantasy)
So we wanted to build a system that would resist a change on the source side. Not that the change would be entirely automated, but we wanted to be able to switch to a new source in minutes, without coding. That’s where our work began.

Wouldn’t it be nice if each FileMaker table was able to generate it’s own import query?

We saw that the left side of the import order could be managed on the fly. It is therefore up to the right side (the database structure) to contain the information.

One spot seemed nice for this: field comments.

Let’s create a small syntax that will:

Then we need to create a custom function. (the code is available in this text file) 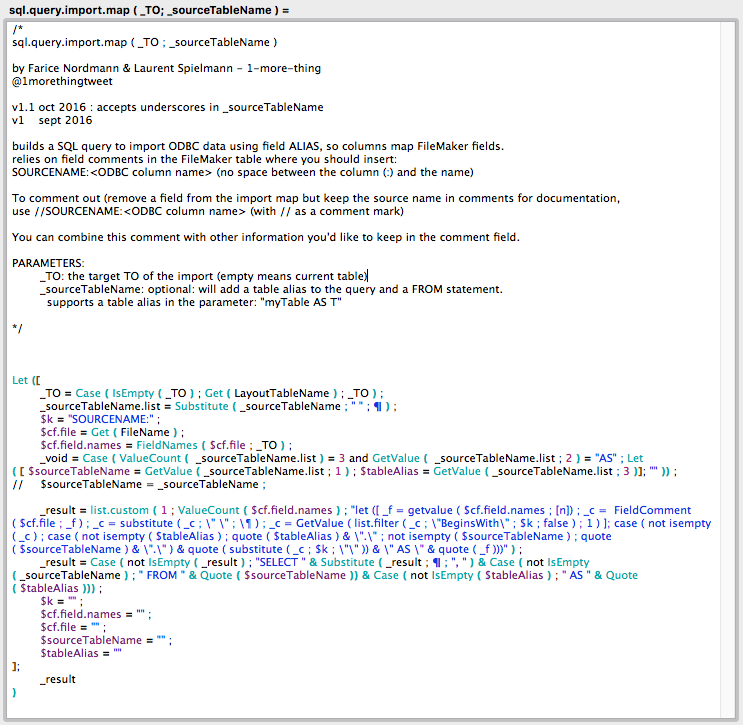 It might look a little complex at first glance but:

In fact, this function code doesn’t matter. If for the above mentioned table we evaluate the following expression:

the empty parameter indicates « current table ». One can also write:

which is exactly the query we need to pass to the script step Import records to have consistent source and destination names.

Here is the same image again:

And conflicts with SQL reserved words are avoided using quotes.

The second parameter, « contacts AS C », could have been « contacts », but the function supports table aliases. This will allow importing from joints in the future (currently not supported by the function)

Finally, this second parameter is optional, so you can inject SQL functions in the query:

So if you need to do more complex things you can:

As you can see, this techniques opens up a lot of possibilities. Whether you’re importing from an external source or from the FileMaker database itself.

If you combine this with the fact that an import script step is able to create a new table, that Execute SQL is able to delete this table (DROP), that you can now duplicate a record set without being limited because a table cannot import to itself, etc, etc… the potential is huge!

Do not hesitate to leave a comment here, and now it’s up to you to explore!